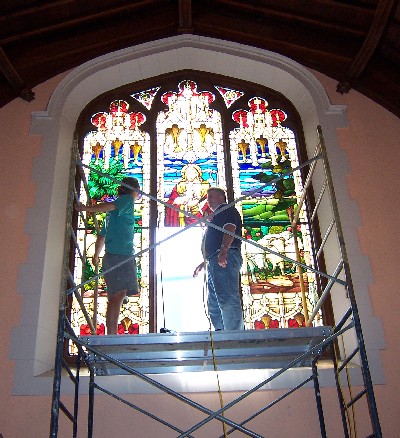 My husband has been repairing stained glass windows since 1976. In those days, Moss took on many repairs of old English style windows that were often taken before the demolition crews levelled the older houses.

Now from our studio in the mountains of the Kootenays, Moss and our 21 year old son Gavin, continue window repair work, but our family business, which includes myself and my step-daughter, Gimel, mostly creates and produces a line of unique glass gifts, both in stained glass and in fused hot-glass designs.

Our glass business was an entity completely separate from our spiritual and religious life until the two melded in June 2005. Yes, we have made a number of Church windows here in Nelson, Castlegar and Trail. They were all challenging jobs, which were designed, constructed and very stunningly powerful when finally in place. There was something very different that was put into action when we were asked by St. Saviour’s Pro-Cathedral in Nelson, to view their stained glass windows to establish their condition.

The day we looked at the windows back in May, we entered the familiar warmth of our worship space with a critical eye and a notepad ready. They vary from small, delicate and quite reachable ones to the large tri-panel series located 35 feet up in the vaulted gothic archway. Situated ten feet above the carpeted chapel area near the heart of the church is the massive 9’ by 14’, tri- panelled feature window. It is an incredible depiction of a compassionate Jesus, robed in red, surrounded by an awesome pastoral, scenic display of dynamic colours and framed at the lower part with golden scrolls. On the lower edge, worked in with lead, reads: I Am The Good Shepherd and Know My Sheep.

As we studied the various windows, we listed a few cracks in a border, a minor break or two and some slight slumping in an unprotected plain window. As we continued, we viewed windows 30 feet up that needed to be repaired on site by ladders and scaffolding. Also there was a set that would actually have to be removed, re-leaded and replaced. All these were restoration procedures that could be accomplished. All the windows needed to be cleaned inside and out, but once the dirt and grime of their long life was washed off and their edges tooled a little, they would be lovely, and brilliantly beautiful. It was apparent that Moss found the windows remarkable in construction and in excellent condition. It was unusual to hear Moss exclaim about the extraordinary beauty and power of the all these memorial windows.

When we returned with a tall ladder, to measure and examine the huge, main, feature window, a serious tone affected Moss’s voice as he described the centre lower panel. It had severe slumping, broken support wires, a pushed out lower section; it was really badly damaged! The 3’ by 5 ½ ‘, lower section (Christ’s waist, past his bare feet, to the bottom edge,) would have to be removed, laid flat on a work table, repaired on site, raised back up again, put into position and reinforced so it would not slump again!

We could access it with scaffolding, but when we stood in the warm, ascetic comfort of the chapel space and looked up, it seemed like an overwhelming and daunting project. A few days later when we talked about the feature window again his voice hesitated… I’ve never handled anything so old, so valuable and so large!” I just don’t know if I can do it?

I telephoned my mother parish, St. Mary’s Kerrisdale, to inquire who had made the gorgeous windows for their new Narthex. They gave me a Toronto name and phone number. What good would it do to call them, I wondered as I dialled? Mr. McCausland would contact us when he returned from out of town.

One afternoon Mr. McCausland called our studio. He had just returned from England where he was overseeing the restoration of Cathedral, stained glass windows. We discovered that much of Andrew’s work involves European churches. He is a specialist, as was his father, his grandfather, and his great grandfather too! Moss and Andrew talked about steel barring and ties and then came the warning of urgency. If the window is not repaired immediately the slumping and tearing from the bars will continue throughout and all the weight of the lead and glass will pull all the panels out of position resulting in extensive and very costly, major repairs!

With continued correspondence about techniques to use, Moss found Andrew to be a most pleasant and friendly fellow. I’ll never forget Moss’s expression when he beamed… “He will be in Vancouver in June, and he will gladly come up to Nelson for one day to oversee the main window repair!”

The most experienced world-renowned stained glass expert is coming to help us at the minimal cost of air flight, some expenses and his favourite lunch- homemade tuna sandwiches with a Pepsi! This seemed like a gift from God! Moss and I began to feel like we were riding in a boat on a fast moving river!

Our excitement and anticipation was mounting when a very heavy wooden crate of steel bars arrived at the church office and Andrew confirmed that he could arrive from Vancouver on the morning flight, and then catch the late afternoon flight back to his consultant and design commitments. He could give us one half day! Gavin and Moss looked at each other… five hours!

What a difference a day makes! On June 26, Gavin, Moss and this six foot tall fourth generation master, were up on the scaffolding peeling away the hardwood moulding, nipping the nails, and manhandling the distressed panel with gusto! Out came the section, hand-over-hand down to the waiting table. Moss’s heart could beat normally again! I had been assigned to get coffees and what a shock when I came around the corner of the alley to see a great black, blank space with a man’s burly arm hanging onto the side!

Ean Gower, our churchwarden, arrived to see how the endeavour was going and as the men chatted Moss worked on the dirty, warped panel that now lay flat on the table. Andrew was satisfied that Moss was completely capable and skilled and so he gave a few instructions and tips, particularly encouraging Gavin as he assisted. He had some fascinating and humorous stories of growing up in the family business. His recounts of his travels, the working factory and of his two sons who help him were really interesting. 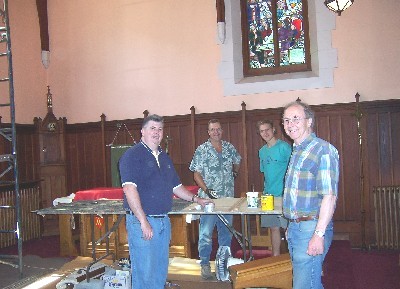 Andrew’s expertise had boosted the project into operation and since he was very curious about our town, I took him for a walk around the main streets and shops. On our return to the church and after our humble, but tasty lunch, Andrew, with camera in hand, enthusiastically moved to regard the other windows in the church. It was amazing being with him as he quickly photographed and identified the windows made by his forefathers! All nine of the beautiful side tri-panels had their trademarks of design and construction. As he pointed them out and since that inspirational moment, they have come to a new level of living stories for me. It seems the light on the glass releases and delights the soul, calling us to a transformed consciousness in the Lord’s abiding presence. It was time to say goodbye, and take Andrew to the airport. Gavin was speechless when Andrew invited him to come to Toronto next summer and work in his factory as a summer apprentice! We left the men to their diligent work.

Upon my return in the late afternoon, the backside of the panel was completed, it had been carefully lowered and in unison, pivoted and turned over. On the right side, they had realigned the lead, soldered the joints, applied the sticky putty, and covered the entire surface with a charcoal grey blanket of chalk dust. I was asked to join them as they were bent over, scoring with wooded sticks around every glass section to get a clean edge. The dust was vacuumed off the and with a spray bottle and a soft cloth we cleaned and polished the darkness off the antique piece. Then, out of my son’s heart and lips came the catapulting realization:” Hey mum, I’m washing Christ’s feet!”

There we were with all the saints before us, with my Anglican mother and father, my Anglican grandmothers and grandfathers! As a family unit we were positioned and aligned with all the followers of the Messiah - Our Good Shepherd! We also have come to serve, to wash feet, to love and give our talents every day, as we work!

After honouring the special kind of silence around us, we continued washing the feet of Jesus and we completed the cleaning of the entire panel that lay before us. It had been a very long day. There was no fear as we hand over hand hoisted it up the scaffolding and into position. We worked buoyant on a spirit that had breathed on us. We felt we were chosen for this job, for that moment of revelation, to be brought to this new awareness that we will carry with us into the future.

When evening came, after the men adjusted, barred, wired, and soldered the panel in place, it came time to put the final nail in the hardwood moulding, and then we all breathed deeply with a heightened sense of grace as we stood below the scaffolding and gazed up at the completed Cosmic Christ!